Major Solar Flare Could Have Been Lethal (1972)

From Aug. 2 to Aug. 11, 1972 -- between the Apollo 16 and Apollo 17 visits to the moon -- the sun released powerful solar flares. Had astronauts been in space, they would have received near-lethal radiation exposure. 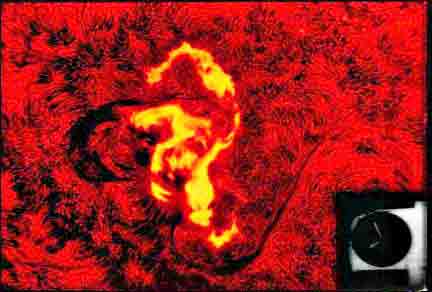 One of the August 1972 solar flares recorded at the Big Bear Observatory. Credit: Science@NASA.

From Aug. 2 to Aug. 11, 1972, the sun released some of the most powerful and deadly solar flares ever recorded during the Space Age. The events began on Aug. 2 when solar astronomers reported that an active region on the sun labeled McMath Region 11976 had produced three powerful flares in a span of 15 hours. The flares were classified as X-class flares, the strongest solar flares. The next day, the Pioneer 9 spacecraft detected a shock wave at 7:24 a.m. EDT from a coronal mass ejection associated with the flares, accompanied by a sudden change in the solar wind speed from around 217 to 363 miles per second.

On Aug. 4 and again on Aug. 7, an instrument on the seventh Orbiting Solar Observatory (OSO-7) recorded the first gamma-ray line emission ever detected from the sun, indicating that protons were accelerated to very high energies during flares from the same active region.

Armed with vastly improved technology and scientific ideas, space weather forecasters at the Space Environment Services Center in Boulder, Colo., were just beginning to be able to predict such solar storms. They issued an alert on Aug. 2 that a major solar storm would soon arrive at Earth. They were not disappointed.

The effects of the storm were widely reported in major international newspapers. Late at night on Aug. 3 in the U.S., auroras were seen from Illinois to Colorado and the events of this storm were widely reported in major international newspapers. At 5:30 p.m. in Chicago, AT&T reported a voltage surge of 60 volts on their coaxial telephone cable between Chicago and Nebraska. Another 30-minute shutdown of phone service on Bell's cable link between Plano, Ill., and Cascade, Iowa, was also attributed to the storm. Both the Canadian Overseas Telecommunications Corporation and Canadian National Telecommunications reported that current surges in their lines had damaged various components in the system.

The August 1972 storm storms are legendary at NASA because they occurred in between two Apollo missions: the crew of Apollo 16 had returned to Earth in April and the crew of Apollo 17 was preparing for a moon landing in December. Although the calculation of radiation exposure is complicated, many researchers have investigated these worst-case-scenario flares and the estimates suggest that a moonwalker caught outside their spacecraft with an ordinary spacesuit in one of the August 1972 storms might have absorbed 10 times the normal human dosage of radiation expected in a lifetime. (Modern medicine, such as a bone marrow transplant, could have saved this hypothetical astronaut's life.)

If the hypothetical astronaut had been inside an Apollo command module, the aluminum hull would have attenuated the 1972 storm to only ten percent of the radiation reaching the astronaut's blood-forming organs. That's the difference between needing a bone marrow transplant versus nausea and headaches.

Modern spaceships are even safer, so if given warning, astronauts can stay inside their spacecraft when a giant solar flare might explode. One of the reasons scientists continue to study solar flares and coronal mass ejections is to improve their ability to forecast such potentially harmful events.